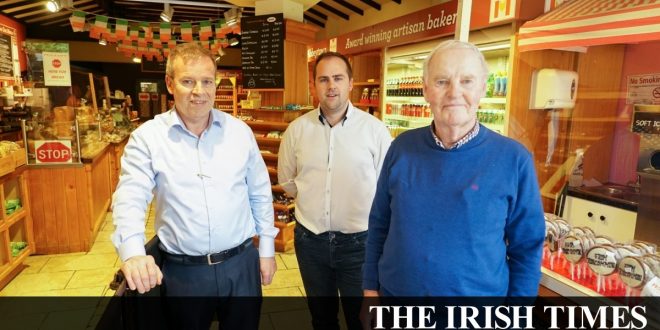 Reopening Roscommon: ‘There is resilience and you can feel it in the community’

Standing in the middle of a freshly cut playing field, Teresa Hession nods in the direction of Roscommon town.

“Ten days ago,” she says, “you could have driven a herd of cattle down the main street, it was so deserted and quiet.”

Hession, chair of Roscommon Gaels, is visiting the GAA club’s home ground, where the clatter of studs coming from the dressing rooms will not be heard for some time yet. This should be peak GAA season, but it’s as quiet as Bundoran in November.

“Everything, everything is on hold until July 20th,” sighs Hession.

Like every other town in Ireland, life pretty much froze in Roscommon on or around St Patrick’s weekend as the impact of the coronavirus pandemic became clear.

“It’s not just this town,” says local Independent TD Denis Naughten. “It is the hinterland. There is a catchment of about 20km in each direction. It’s not the town itself but the communities around [that came to a standstill].

“Co Roscommon has one of the highest dependency ratios in the country and one of the oldest populations. So we had a lot of older people isolated in rural areas. It was difficult trying to get in contact with them.”

For 10 weeks, all was preserved in aspic. But since the pandemic restrictions were eased last Monday there has been a clear increase in local bustle. There are lots of cars around and enough people on the main street to prevent even a tiny herd of cattle being driven down it.

A number of the businesses and shops have reopened, but the majority on the main street remain shuttered, with some unlikely to open again.

In many ways, Roscommon, with a population of about 7,000 people, provides a good case study of how small towns have endured the pandemic, and the challenges and struggles to come in dealing with the economic, health and social consequences.

“I even remember rationing for tea and tobacco after the last big war. But we’ve never seen anything like this,” he says.

In the GAA-mad county, Molloy is an institution having captained the 1951 minor team that won an All-Ireland title. The family’s bakery, now run by his son Declan and grandson Mark, was founded in 1922 by Barry’s father.

Declan, wearing an immaculate blue shirt with the sleeves rolled up, is already halfway through his day in the bakery when we meet at 9am.

When the crisis hit, he had to lay off some staff and introduce strict distancing protocols in the shop. The cafe was closed. The staff wore masks, self-service was abandoned and bakers worked across two shifts, one starting at midnight.

“It was probably a bit of pride [that kept the shop open]. We have not closed our doors since 1922, only on Christmas day. If we did close, there might be a change of habits and some might not come back to us,” he says.

Another local retailer who has adapted to the changed circumstances was Rita Oates, whose family has run the ETL craft and gift shop on the main street for 35 years. Oates is an artist and, with help from the Local Enterprise Office, through grants and social media mentoring, she has built an online business around her art and cards.

But what about the businesses that are yet to reopen?

Brendan Allen, president of the Roscommon Chamber, is acutely aware that these have been hit hardest.

“Any business that has had to stop dead and restart, that will mean an entirely new entrepreneurial venture again. Hospitality is where I see the biggest impact,” he says.

We have lost our own members. People stand out in the street to pay their respects as the hearse goes past

“One positive thing is businesses in Roscommon are champing at the bit to reopen. They are not in a rush and do not want to do it fast. There is resilience and you can feel it in the community. But we can take nothing for granted.”

Louise Ward, who heads the Local Enterprise Office, is optimistic but mindful of the challenge ahead. Her five staff, all working remotely, have fielded some 2,500 calls from worried business owners since March.

“We are 95 per cent micro in Roscommon and 5 per cent large business,” she says. “I am positive. We have had a surprising number of enquires about startups. I know there will be a small percentage that will never open again.”

The need to help the county’s vulnerable and older populations has focused many minds during the pandemic.

Tomás Beades is operations manager of the Roscommon Leader Partnership, which seeks to improve the quality of life in the area. As we meet, he and Helen McGinty are loading up food parcels to deliver to children with special needs who normally attend St Michael’s school in Castlerea, but are stuck at home for now.

Beades and his colleagues came up with a plan for deliveries to people confined to their homes; it has become part of a countywide operation involving all 28 GAA clubs and other voluntary bodies. The requests have ranged from knitting wool to cigarettes, and so far he has totted up 234 deliveries of goods, 545 of groceries and 1,740 meals.

“There are so many old people out there living alone with no next-of-kin,” he says.

The GAA community has played its part. Hession points to the fields and says there would, in normal times, be hundreds of people coming and going on any day of the week.

The club has not stood still during the pandemic. For the Darkness into Light suicide prevention initiative, senior player Brian Kelly got members to run successive 5km shuttles, and the club raised €10,300 for Pieta House.

“We are the organisation that wraps our arms around people who have suffered loss,” says Hession. “That’s what we do. We have lost our own members. People stand out in the street to pay their respects as the hearse goes past. We contact families and let them know we are here to help.”

They are very much afraid. Some of the men have had [Covid-19]. And some families had to isolate

There has been a sting in the tail, too. The number of Covid-19 cases around Roscommon was low just as the restrictions were due for easing, but two significant clusters emerged. One was at the Kepak meat plant in Athleague, the other at the Cloverhill nursing home. These have caused sorrow and a frisson of anxiety given the close connections both operations have to the town.

The clusters have added a layer of complication to recovery here, with Brazilians, who make up about 10 per cent of the local population, most affected. Many work in Kepak or are employed as carers.

Jim Heneghan (83), a Holy Ghost priest who spent 50 years as a missionary in Brazil, has been ministering to the Brazilian community in Roscommon since 2006.

“They are very much afraid. Some of the men have had [Covid-19]. And some families had to isolate. Most have recovered,” he said.

Some of the families have been here for close to two decades and have become naturalised Irish citizens. Their children have gone on to third-level education.

“Roscommon is a good place to live. People can work in good jobs and get a good education and there is no violence,” says Jessica Olivera, a mother who works in Kepak along with her husband.

Since the first case at Kepak two months ago, rules have been put in place including staggered shifts and meal breaks to try to get on top of the outbreak.

“It’s a worry, particularly as we reduce some restrictions,” Naughten says. “I think, though, we can manage those clusters so they don’t come back into the community.”

The TD is also upbeat about the future. He accepts it will be challenge and things will change. And, like Allen, Naughten thinks societal acceptance of remote working could be a game-changer for the area.

If exploited properly, the recent changes Ireland has gone through could help to repopulate Roscommon and rural towns like it after a generation of losing many of their young to Dublin.

“It will allow people from here to return while still working for multinationals using high-speed broadband,” Naughten says. “People have appreciated the less rushed lifestyle we have here, with open spaces, and less pressure.”