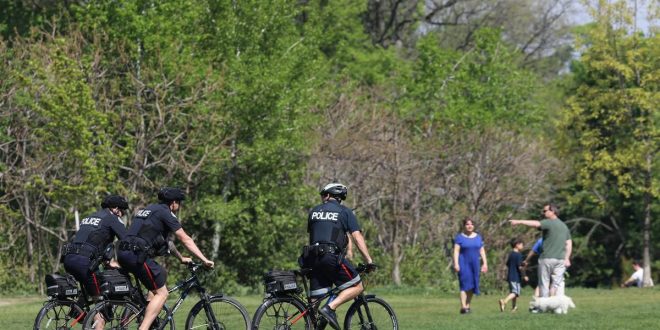 The latest novel coronavirus news from Canada and around the world Monday (this file will be updated throughout the day). Web links to longer stories if available.

8:09 a.m Queen’s Park has quietly staked $500 million on Ontario Lottery and Gaming to keep the provincial gambling agency afloat during the COVID-19 pandemic.

With Ontario’s state of emergency shuttering casinos, slot machines, and racetracks for the past two months, the gaming monopoly was in dire need of a cash injection.

Finance Minister Rod Phillips’ office said the Ontario Financing Authority “is providing OLG with a line of credit to temporarily support OLG’s operational costs and help meet its contractual obligations over the short-term.”

Read the full story by the Star’s Robert Benzie.

7:30 a.m. The Chinese city of Wuhan has conducted more than 6.5 million coronavirus tests over a 10-day period in a bid to test all its 11 million residents, state media said Monday.

The city’s health commission, in a post on its website, asked anyone who hasn’t been tested to come forward by the end of Tuesday.

No new COVID-19 cases have been reported since the 10-day campaign started, though some people with no symptoms tested positive. More than 3 million people had been tested prior to the campaign, the official Xinhua News Agency said.

The campaign was launched after a cluster of six cases was discovered in one residential compound. Wuhan, where the global pandemic is believed to have started late last year, was by far the city hit hardest in China.

7:27 a.m.: Live Nation Canada and Budweiser are partnering to bring a “concert experience this summer for fans to enjoy in the comfort of their own home.” Every Saturday evening, beginning May 30 at 8 p.m., live music from the Budweiser Stage will be broadcast online.

“The month of May has always been the kick-off to summer with the opening of Budweiser Stage, however, during these unprecedented times we’ve all had to change how we live our lives. But it hasn’t changed Budweiser’s commitment to its community,” said Todd Allen, Vice President, Marketing, Labatt Breweries of Canada in a Monday morning press release.

The concert series will be available on Citytv and will stream online at citytv.com and livenation.com. The first event will feature The Black Crowes with The Trews.

7:16 a.m.: Memorial Day in New York City is being marked with car convoys and small ceremonies instead of parades, as those looking to honour fallen military members have to contend with coronavirus restrictions.

“It’s something we’re upset about, but we understand,” said Raymond Aalbue, chairman of the United Military Veterans of Kings County, which usually puts on a parade in Brooklyn.

There’s “no reason to put anybody in harm’s way,” he said. Still, “it’s really cutting quick to the heart of all the veterans.”

His organization will have a convoy of 10 cars leaving from the Bay Ridge spot where the parade usually starts and then ending up at the Brooklyn veterans affairs hospital, where participants will line up next to their cars for a salute and a wreath-laying ceremony.

In Queens, the group behind the Little Neck-Douglaston Memorial Day Parade will have a few people at the site where they normally end their parade, said executive director Victor Mimoni.

One person will lay a wreath, another will do a flag ceremony and a third will play “Taps” while some others watch, he said, a far cry from the crowds that usually attend the event.

But “we felt the need to do something,” Mimoni said.

7:14 a.m. Japan’s professional baseball season will open on June 19 under a plan that excludes fans.

League commissioner Atsushi Saito made the announcement on Monday after an online meeting with representatives of the league’s 12 teams.

Teams can being practice games on June 2.

The season was to have begun on March 20 but the start was postponed because of the coronavirus pandemic. Japan has reported about 850 deaths from COVID-19.

Japan joins South Korea and Taiwan whose leagues are open and playing largely without fans.

Tory added that the city will be addressing on-street cycling later Monday. The targeted areas will include Bloor Street West from Shaw to Runnymede, on the Danforth mirroring transit lines, University Avenue, as well as Bloor Street from Avenue to Sherbourne.

6:55 a.m.: South Koreans will be required to wear masks when using public transportation and taxis nationwide starting Tuesday as health authorities look for more ways to slow the spread of the coronavirus as people increase their public activities.

Health Ministry official Yoon Taeho on Monday said masks also will be enforced on all domestic and international flights from Wednesday. From June, owners of “high-risk” facilities such as bars, clubs, gyms, karaoke rooms and concert halls will be required to use smartphone QR codes to register customers so they can be tracked down more easily when infections occur.

South Korea was reporting 500 new cases per day in early March before it largely stabilized its outbreak with aggressive tracking and testing. But infections have been rising slightly since early May, with more people going out during warmer weather and eased social distancing guidelines, causing concern in a country that has just started to reopen schools.

6:15 a.m.: Two workers at a downtown Loblaws have tested positive on a presumptive test for COVID-19, the company said late Sunday evening.

In a statement, Loblaws noted that the two team members from the Maple Leaf Gardens store, located at 60 Carlton St. near Church Street, last worked on May 13 and May 18, but were not yet symptomatic at the time.

Never miss the latest news from the Star, including up-to-date coronavirus coverage, with our email newsletters

The store has been thoroughly deep-cleaned and sanitized and will reopen as usual Monday morning, the company said. “Out of an abundance of caution, we’re notifying customers who recently transacted at this store,” they added.

6:10 a.m.: Japanese Prime Minister Shinzo Abe lifted a coronavirus state of emergency in Tokyo and four other remaining areas on Monday, ending the restrictions nationwide as businesses begin to reopen.

Experts on a government-commissioned panel approved the lifting of the emergency in Tokyo, neighbouring Kanagawa, Chiba and Saitama prefectures, and in Hokkaido to the north, which had more cases and remained under the emergency declaration after it was removed in most of Japan earlier this month.

Abe said the lifting of the emergency does not mean the end of the outbreak. He said the goal is to balance preventive measure and the economy until vaccines and effective drugs become available.

Japan, with about 16,600 confirmed cases and about 850 deaths, has so far avoided a large outbreak like those experienced in the U.S. and the Europe despite its softer restrictions.

But the world’s third largest economy is fallen into a recession, and public discontent over Abe’s handling of the coronavirus has sent his support ratings tumbling. Recent media surveys show public support for his Cabinet has plunged below 30 per cent, the lowest since he returned to office in December 2012.

6:06 a.m.: The House of Commons is meeting today to decide, again, how it’s going to function as COVID-19 restrictions gradually lift across the country.

The governing Liberals are proposing four sittings a week of a special committee to talk about the pandemic and how the government is responding to it, using a hybrid system with some MPs in the Commons chamber in Ottawa and others participating by video conference.

They would also have four days scattered through the summer when MPs could press cabinet ministers on other issues.

The Liberals appear to have the NDP’s broad backing for the plan, which would be enough to get it passed today.

Sunday 10 p.m.: Ontario’s regional health units reported their first day below 400 new COVID-19 cases in nearly a week on Sunday as Toronto’s average rate of new infections has hit a new high, surpassing a previous April peak, according to the Star’s latest count.

The total of 339 new confirmed and probable cases reported since Saturday evening was well down from a recent string of above-average case reports this week, which had seen five straight days at above 400 new cases.

A recent upturn in infections across Ontario has not been felt equally across the province. The daily count of new cases has been relatively flat outside of Toronto over the last two weeks. Meanwhile, numbers in the city have now surpassed the highest levels of new case reports seen since the beginning of the pandemic.

Indeed, most of Sunday’s case growth in Ontario came in Toronto, which by itself reported another 200 new cases, with nine more fatal cases.

Last month, Toronto‘s daily average for new cases rose steadily to eventually peak at an average of 209 per day for the seven days ending April 23. On Sunday, the equivalent seven-day average passed that rate, to 218 cases per day.

Meanwhile, the 24 fatal cases reported in the province since Saturday evening were in line with the long-term recent falling trend. The rate of deaths is down considerably since peaking at more than 90 deaths in a day earlier this month, about two weeks after the peak in the daily case totals.

Earlier Sunday, the province once again reported another day in which testing labs completed far fewer COVID-19 tests than the target of 16,000 daily. The 11,383 tests completed the previous day was the seventh straight well below the target. The province says the labs have the capacity to complete about 20,000 tests daily.

In the past, spikes in case counts have followed days with high testing rates, and vice versa for days of low testing.

Because many health units publish tallies to their websites before reporting to Public Health Ontario, the Star’s count is more current than the data the province puts out each morning.

The province also reported 878 patients are now hospitalized with COVID-19, including 148 in intensive care, of whom 104 are on a ventilator — numbers that have fallen in recent weeks. The province also says nearly 19,500 patients who have tested positive for the coronavirus have now recovered from the disease — about three-quarters of the total infected.

The province says its data is accurate to 4 p.m. the previous day. The province also cautions its latest count of total deaths — 2,073 — may be incomplete or out of date due to delays in the reporting system, saying that in the event of a discrepancy, “data reported by (the health units) should be considered the most up to date.”

The Star’s count includes some patients reported as “probable” COVID-19 cases, meaning they have symptoms and contacts or travel history that indicate they very likely have the disease, but have not yet received a positive lab test.

Read more from the Star’s coverage on Sunday.