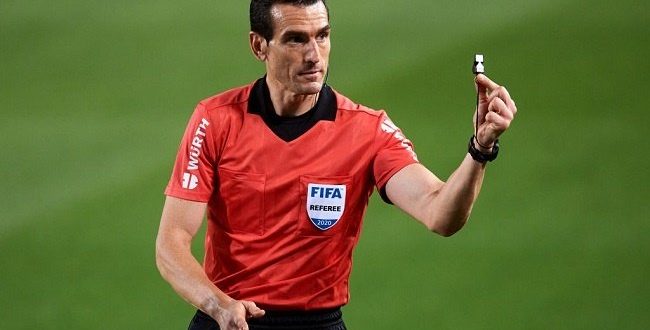 Will sport embrace electronic whistles in a Covid-19 world? | Sport Will the traditional whistle go obsolete in a post Covid world? (Getty Images)

One prominent example is Kookaburra, who a while ago touted its waxed cricket balls as a way for fielding teams to keep it shining without using saliva.

However, a product is emerging that would dwarf the amount of “virus-proofed cherries” around the world’s cricket fields: the electronic whistle.

No instrument has become more iconic in sport officiating than the whistle, which was introduced way back in 1868 when Joseph Hudson used it for an English soccer match.

Medical experts, however, have become concerned that increased respiration that’s associated with most sports increases the risk of transmission.

Referees with whistles are no exception.

After all, the very act of blowing it releases air full of droplets.

Overcoming that challenge has become a huge opportunity for Fox 40, North America’s most recognisable producer of whistles.

According to the New York Times, the company has seen a surge in demand for its electronic whistles, which has over the last two months totalled over 50 000.

The whistle’s sound is created via the push of a button and its tones can be adjusted between 96 and 120 decibels, “from the sound of a lawnmower to the sound of an ambulance siren”.

Fox 40 has a few competitors, but is well-placed to become a preferred brand as it has pre-existing agreements with the NBA and NFL.

While various US-based sporting codes have included the use of electronic whistles in their return-to-play protocols, some referees are concerned that adapting to it could lead to wrong on-field calls.

“We have that momentary time lag between taking your whistle from your hand to your mouth, and that little instance sometimes can save you from blowing an inadvertent whistle,” Steve Shaw, the national coordinator of officials and secretary rules editor for college football, told the publication.

“And this has none of that kind of delay built into it because it’s right there in your hands. And right there, your thumb is on the button. So we’d have to really talk through being patient.”

The National Collegiate Athletic Association’s chief medical officer has hailed the electronic whistle as “brilliant” and its use isn’t confined to sports – in April, a large European train company bought 3 000 units for its employees.