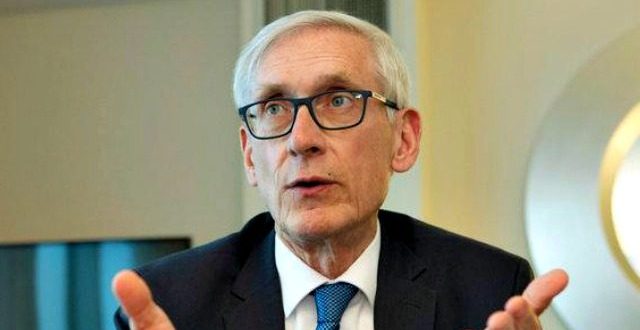 Wisconsin Gov. Tony Evers, a Democrat, insists on keeping the state shut down until May 26 despite a declining rate of positive COVID-19 tests, hospitalizations, and coronavirus deaths per capita in the state.

Evers first shut the state down with a “safer-at-home” executive order for 30 days in late March. Then on April 16, he announced he would be extending the original shutdown for 30 days until May 26 after the original 30-day shutdown order expired.

Four days later, “[o]n Monday [April 20], Evers released his plan for reopening Wisconsin that requires, among other things, a 14-day decline in positive COVID-19 cases and more protective equipment, tests and other supplies to deal with the pandemic. He said his plan mirrors guidelines issued by President Donald Trump’s administration,” the Associated Press reported:

“I just accepted the biggest Republican in the country, his plan, because it’s a rational plan,” Evers said. “Now, if the state Republicans don’t think Donald Trump is appropriate, they can deal with Donald Trump, I guess.”

Evers’ claim that he is simply following the guidelines established by the Trump administration for state governments last month, which includes three different areas of focus — cases, symptoms, and hospitals — does not accurately represent the details of those guidelines, however,

Evers has hung his decision to extend his “safer-at-home” executive order to May 26, in part, on data that shows the absolute number of COVID-19 cases has not declined. But the Trump administration guidelines specifically state that the case guidelines can be met with either a “downward trajectory of documented cases” or a “downward trajectory of positive tests as a percent of total tests.”

This significant downward trend between April 26 and May 11 has brought the percentage of those who have tested positive in Wisconsin since the start of the pandemic down from 9.1 percent on April 26 to 8.8 percent on May 11, as Table 1 below illustrates.

Source: Data from The Covid Tracking Project, as of May 11

Though the absolute number of new daily cases of coronavirus has increased between April 26 and May 11, that is a function of the near doubling of tests conducted, as the percentage of positives has declined from 8.6 percent during the three days between April 26 and April 28 to 7.2 percent during the three days between May 9 and May 11.

The 8.8 percent positive rate of all those who have taken the COVID-19 test from the beginning of the pandemic to May 11 in the state of Wisconsin (10,418 out of 118,451) is far below the national average of 14 percent (1.3 million out of 9.3 million), as reported by the COVID Tracking Project during the same time period.

With regards to the guidelines established by the Trump administration for hospitalizations, Breitbart News reported, “the guidelines specified the requirement to meet both of two criteria: (1) Treat all patients without crisis care, AND (2) Robust testing program in place for at-risk healthcare workers, including emerging antibody testing.”

Cumulative hospitalizations for COVID-19, that is, all patients who have ever been hospitalized since the start of the pandemic in Wisconsin, have increased by only 449 patients between April 26, when it stood at 1,397, to 1,846 as of May 11, according to the COVID Tracking project.

Current hospitalizations are far lower. According to the Wisconsin Department of Health, there are at present only 340 patients hospitalized in the state for COVID-19. Of those, 116 are in ICU beds. An additional 180 are hospitalized pending results of COVID-19 tests.

Hospitals remain far below capacity in the state when it comes to regular beds, ICU beds, and ventilators in use by COVID-19 patients.

According to the Wisconsin Department of Health, 1,257 ventilators are on hand in the state, while only 356 are receiving mechanical ventilation for the treatment of any disease.

The Badger State has one of the lowest COVID-19 per capita death rates in the country. The average age of residents of Wisconsin who have died from COVID-19 deaths is 76 years old (See Table 2 below, based on the latest data from the Wisconsin Department of Health), slightly older than the national average of 75. According to the Wisconsin Department of Health, 42 percent of the 400 people who have died of COVID-19 were residents of nursing homes.

Average Age of Wisconsin Resident Who Has Died of COVID-19

Source: Data from Wisconsin Dept. of Health as of May 10

Wisconsin seems to be experiencing the same phenomenon as other states — an increasing percentage of COVID-19 deaths are coming from nursing homes.

On Friday Gov. Evers announced a plan to reopen the state when the current order expires on May 26, but not before:

Evers’ order to stay home expires May 26 and the governor said Friday he doesn’t see any reason for it to be extended. It could be cut short, technically, by a Wisconsin Supreme Court ruling in a lawsuit brought by Republican lawmakers to block Evers’ order.

The lawmakers are also asking the court to immediately delay its decision to give the department time to come up with a different plan that would be considered by a Republican-controlled committee that includes members that have been heavily critical of Evers’ approach to controlling the virus outbreak.

Practically, it’s possible a new plan wouldn’t be in place until after the order lawmakers are seeking to block expires anyway.

The most recent data is likely to bolster the case filed by Republicans to end Gov. Evers’ “safer-at-home” executive order before May 26, but it is unclear if the Wisconsin State Supreme Court will render a decision on the case before the executive order expires.

Previous COVID-19 updates for Saskatoon and area for Monday, May 11
Next “Rise Up New York!”: Star-studded virtual telethon raises $115 million for New Yorkers